Who’s a Happy Little Writer then?

Why, me of course!

The local launch of 8 States of Catastrophe was like a perfect dream for me.

As my dear friend Vince said in his speech, the main reason that Stanthorpe has become my adopted home-town is because of its people.  I am constantly blown away by the friendliness, the generosity of spirit, and the willingness of so many to go out of their way for others. Even people who have no time to read or who traditionally pursue other recreational activities came out on a miserable wet night to show their support for me and my crazy writing addiction. 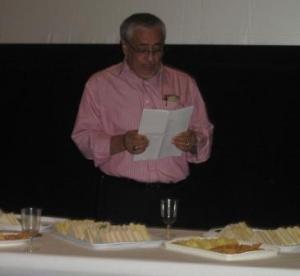 ...and me trying not to cry 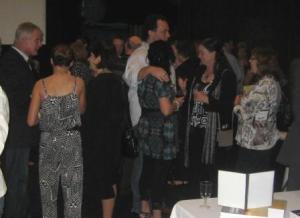 Refreshments:  The standard easy fare of biscuits and cheese, and platters of sandwiches (Thank you Denise, Sarina and Maria for your expertise and willing hands).  Mellow red and crisp white (from Vincenzo’s at the Big Apple).  Very grateful to my brother Bob and sister-in-law Denise for helping attend to the bar.

Photos:  Thanks to “Special K” for taking lots of happy snaps of the night and thank you Shannon Newley for coming along on a Saturday night to take some pics (here’s Shannon’s article written for the Stanthorpe Border Post published 17/3).

The hour and a half flew by in a whirl of pecked cheeks, signed books, raised glasses, chatter and laughter.  There were lots of willing hands and it would be impossible to thank everyone who helped out but I would like to say a special thank you to Gary for segueing from barman to “money-man” time and again and for still smiling at the end of a hectic day.

Show Me the Money!

The night will bring a smile to my dial for many years to come.

We are gearing up for the Stanthorpe launch of 8 States of Catastrophe now and I am looking forward to it.

Some readers of this blog would not be familiar with Stanthorpe (especially those from Canada and the States but also, it seems, some of the more recent readers residing in Australia’s southern states).  For anyone interested, here’s a portal from where you can check out my adopted home-town.

As I have mentioned elsewhere, my ‘day-job’ office is in the Arcadia building which used to house the local cinema many moons ago.  In the process of renovating and upgrading the offices, my boss decided to embark on the mammoth project of having some old cinema equipment restored which resulted in an homage to history;  the small, classy, old-fashioned Arcadia Theatre, sporting much of its original movie equipment and even the old light fittings.

Said boss – and very good friend – has kindly offered me the use of the theatre – or did I con him into it? – and it seems to me to be a perfect venue for a book launch.  Having made the decision not to install fixed chairs means the area can lend itself to all sorts of functions, rather than just movies [having said that, there’s just nothing like that old-fashioned movie experience].

For the hour and a half event, we are sticking with the formula we used for Hobart.

Food: cocktail sandwiches, red and white wine, juice.   We all know that authors basically starve for their art so people are generally happy and pleasantly surprised to be given a drink and a small bite to eat when they come to a launch.

Formalities: no lengthy speeches and definitely no speech from the author (I can almost hear the sigh of relief from anyone who has ever heard me try my hand at public speaking).  Vince (the aforesaid boss, friend, solicitor, venue owner and father to the suave, sophisticated and inimitable ‘Third in Line’) has agreed to speak.

Book signing: Still not a fan of the author sitting at a table like a stuffed chook waiting to autograph books. I’ll be there mingling and signing books for anyone who asks and, hopefully, having a good time.

For those of you from far-flung places who won’t be here, rest-assured I’ll post up some pics soon after the event.