Where are all the Calgarians?

It wasn’t until our third trip into the city that we found the answer to our question. Where were all the people? Turns out Calgarians have a whole other life inside the buildings. There are maps (just like the outdoor street maps) that you can follow so that you spend the whole time inside the heated shops and walkways. In retrospect, I’m glad I didn’t find this out until later; if I’d known, I might not have seen so much of the stunning city architecture. Here’s a little sample. 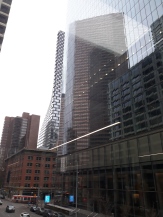 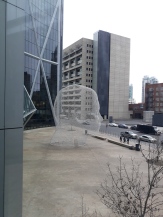 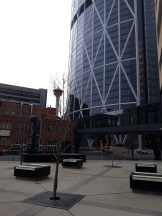 Now, I may have hinted on my last post that we’d be tubing. Unfortunately, that did not come to pass as the tubing paddock was not open. But Olympic Park did not disappoint as we sat drinking hot chocolate and marveling at the skiers jumping and racing their way down the slopes.

We faced a similar situation when we worked up the nerve to try ice skating at the plaza (free in the city, apart from skate hire). Due to recent rain and snow, the surface had gone quite powdery and was not ideal for complete novices like us. Instead, we spent a few hours at the Glenbow History Museum and Art Gallery. Well worth the visit. Then, today, in better conditions, we went back to the plaza and . . . what can I say? . . . let the picture do the talking?

Yes, that is like a wheelie walker. Yes, that is as good as I got! No, G will not allow me to post a picture of him.

One of the highlights for both of us was seeing our first ice hockey game. We had decided on a university game thinking (quite rightly) it would be more affordable ($5 ticket) and (wrongly) that it wouldn’t be heavily populated. As it turned out, we had stumbled our way into the Annual Crowchild Classic at the Saddledome Stadium which was an absolute blast. Packed to the rafters and so much noise! It was a very exciting night.

It was funny to see – just outside the stadium – a herd of rabbits (I had to look up their collective term, discovering in the process that a collection of mice is called a mischief). Huge, fluffy, white rabbits. All happily munching, impervious to the crowds. Reminiscent of the goose that sauntered up the city sidewalk just days before.

We have had some magnificent walks in the nearby Glenmore Park. We saw a herd of deer (yep, I googled to check that too and discovered a group of skunks is called a surfeit – not surprising!). I was too stunned by the beauty of the deer and couldn’t manage a pic. Of course, we saw lots of birds and the ubiquitous squirrels (never get tired of their antics). PS, the squirrels are collectively a scurry, which suits them perfectly.

Oh, I should mention the most beautiful and superbly functional and busy library I have ever seen.

We have an art-gallery-crawl day planned but not too much else as we really adore spending time with the two gorgeous pussy cats (especially when it is well into the minuses outside). Whilst the female is rather self-sufficient and sometimes aloof, she has warmed to us on her own terms (sitting at the window with Gary watching the snowfall or whispering sweet nothings into my ear). The male, arthritic and not too mobile, is a soft old smoochy and he has the most beautiful singing voice which he warms up in the early hours. In the end, it is all about the pets, and we are going to miss them heaps.

The jackets we purchased have been fantastic. We have seen other jackets that take up much more room but they are no warmer. This is how small our macpacs scrunch up (next to my computer mouse for sizing).

The only thing I would suggest is to see if they come a little longer to cover the thighs and also get one with a hood. Definitely don’t get thicker ones though, if luggage room is an issue.

Cat-owners and carers. Spruce wood pellets – fantastic to use as kitty litter!