Tag Archives: Sisters of the Bruce

SISTERS OF THE BRUCE by JM Harvey: Book Review

I am thrilled to hold in my hands a copy of the historical novel Sisters of the Bruce by JM Harvey.  The author is a good friend of mine and I was delighted to have the opportunity to read and comment on this, her first novel, in its manuscript form.  It was with some trepidation that I initially took on the task of appraising the manuscript, as 13th century Scotland is outside my standard reading material but it turned out to be quite an entertaining page-turner.  So here then, is my review… 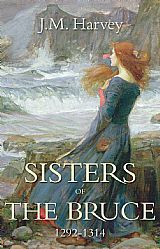 This fictionalized account of the lives of Isa, Kirsty, Mary, Mathilda and Margaret – the sisters of Robert the Bruce – brings Scottish history to life, variously through nail-biting action sequences, breathtaking accounts of deprivation and heartbreak, and through the easier rhythmic epistolary conversations of the sisters which lend immediacy to the narrative.

The juxtaposition of the everyday recounted in the sisters’ letters, with the raging wars of the period affords a glimpse into the past, an experience more profound and enjoyable than any history book could provide.

Readers with an interest in Scotland, Scottish history or history in general will find this an enjoyable read.  However, it would by no means be limited to that demographic.  As a reader, I have no particular interest in history or Scotland and was enticed more by the idea of the strength of these women who I knew nothing about. There is definite appeal to lovers of Literary fiction also, through the epistolary form which allows for domestic intimacy alongside the sweeping catastrophic events of the Scottish Wars of Independence.

With a deft touch, the author introduces the readers to the language of the time and place and keeps them there easily.  Each of the female characters maintains her own distinctive voice through her correspondences.

While much of the lives of the sisters may seem alien to our 21st century sensitivities, other parts traverse time and space.  Isa’s sadness upon her first child being still-born for instance: ‘Little enough chance either to even gaze upon his small, perfect features before his tiny body was ripped from my arms and placed – who knows where?’ (54) and, later, the joy of a dog gifted to her:- ‘When the little mite’s pink tongue licked my hand, the world seemed to come back into focus, alive with colour once more.’ (57)

Mary’s time in the cage is told with such fierce brutality that we can feel her pain and her rage and humiliation, achingly brought forth here:- ‘To drift and fall effortlessly upon demand through time’s lucent barrier was her only path to freedom.’ (266)

The spirit, manners and social conditions of the age are imparted seamlessly in the sisters’ letters and Harvey has a knack for melding the universal with the particular to sketch thoughts and feelings:-

The author showcases an original voice and a considered approach to words and imagery:-

It is easy to grasp a sense of the enormous strength of the sisters early in the story and the sentiments remain long after the final word.  Here is Mary’s almost unbearable pain as told by Mathilda in her letter to Isa:  ‘At times, you can look into her eyes and see she is lost somewhere in a dark vale of sorrow and regret and unfathomable pain.’ (409)

Sisters of the Bruce is an exceptional epic novel.  The extensive research involved shines through the narrative and I would highly recommend it not only to those interested in the history of Scotland but to anyone who enjoys reading about the strength and resilience of women.  It will also appeal to people (like me) who enjoy the intimacy of a story told through private fictional letters. It is a sprawling read of intimate domesticity and vast adventure, at once alien and familiar.