After reviewing In The Quiet and then having the privilege of interviewing its author Eliza Henry-Jones (for the Australian Women Writers Challenge), I was looking forward to reading Ache with both anticipation and wariness, concerned that this second book may not live up to expectations. My fears, I am pleased to say, were ungrounded. Ache is a powerful novel with a deep sense of place and, as Henry-Jones signed a three-book deal with Harper Collins, I will eagerly anticipate the third. 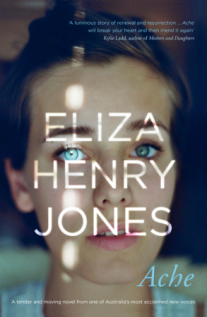 For now, it’s all about Ache.

There is a city/country binary throughout the book reminiscent of the old Lawson/Paterson rivalries with country coming out the clear winner. Specifically mountain country: when the central character – Annie – thinks of her nana pressing her hands to the rough face of a tree, she remembers the life of it, ‘But the eucalypts in the city feel different.’ (5). Of country life, Annie remembers ‘trees and wood and the hum of bees’, the ‘thick smell of honey’ (6) where, in her city space she has a sparse backyard, most of it concreted. The yard is grey, the fence is grey, life itself seems to splinter into shades of grey. She worries about her daughter growing up, moving in the small circles of the terrace and the narrow streets, instead of the wide circles on the ‘safe’ mountain of her own childhood.

In the opening pages of Ache we are presented with twin mysteries: 1) what led to photos of Annie and her daughter’s escape from the fires appearing on the front page of the newspaper, and  2) what happened to Annie’s first love – Alex. And there are little mysteries to be teased out as well such as why Annie’s daughter Pip insists on being called Phillip since the onslaught of the bushfires.

Henry-Jones shows a deep understanding of the accoutrements of grief, like the food in Tupperware containers that Annie couldn’t stomach: it ‘tasted like grief.’ (9).

There’s a gritty realism to the scenes between Annie and her husband Tom, when they love and when they argue.

Annie breathes out. She wants to press up against him, breathe sorry into his ear until he softens and hugs her back. But she doesn’t. It’s like she has to punish him, over and over, for something he hasn’t done. (21)

I felt the embrace of the circle of life between the lines: Annie grieves for her grandmother and mourns what is lacking in her relationship with her mother. At the same time, she experiences jealousy over the easy rapport between her daughter and her mother and begins to understand that her mother would have felt those same emotions when Annie was growing up so close with her grandmother.

There’s some careful word choices and beautiful phrasing throughout:

An increase in tetanus in the region makes Annie ‘feel blanched with sadness’ (131).

When she encounters her ex-lover she thinks how different it would have felt in the city. ‘Out here, after the fires, she feels the lines of herself become like water.’ (143)

And how’s this for a visual that you can almost hear? ‘A breeze picks up, snaking all of the wind chimes along their balcony into song.’ (5)

Henry-Jones writes carefully and with understatement of the fire’s aftermath. It is the unsaid that makes it so powerful. Skirting around burnt-out cars, Annie looks the other way. ‘Terrified of what she might glimpse in the wreckage. Seatbelts, still done up, perhaps. The charred suggestion of bones.'(122). Less than a page later, Annie is far from looking the other way as she steels herself and does what needs to be done. The language is spare, making the content here all the more cruel and startling.

Eliza Henry-Jones should be rightly proud of her second novel. She is indeed a startling young talent.

I have not searched for other reviews as the embargo has only just lifted and I am pleased to be able to post this review today. I am sure there will be many more.